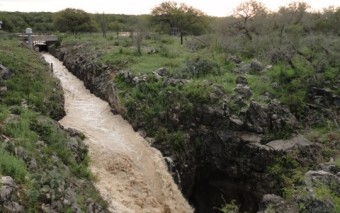 The story behind the stories

Hell’s Oasis has been making its way into the news.

Freelance journalist (and soon-to-be reporter for Climate Progress) Ari Phillips writes about some of our travels in Central Texas in Texas Climate News, including our visit to a sinkhole big enough to swallow a Mack truck—the Seco Sinkhole, pictured below after a good rainfall (photo by Chester Wareham of Record Buck Ranch). The sinkhole is managed by the Edwards Aquifer Authority. This one hole in the ground recharges San Antonio’s primary drinking water supply by about half a month’s worth of water every year. We’re also in the Del Rio News Herald, the same paper my grandpa owned back in the early 1940s. Del Rio is where we visited Stanley Arledge, and stands alone as the only city in Texas completely dependent on springflow for its drinking water supply. The San Felipe Springs recently dropped below 20 million gallons for four consecutive days, a sign of potentially significant supply shortage to come.

It’s great to be part of the story of water in Del Rio, as told by Karen Gleason, who has been almost the only voice reporting on amplifying threats to the region’s water security. The drought may be responsible for diminished springflow today, but, as Gleason reports, Val Verde County’s rich aquifers are also attracting attention from water marketers. One marketer, Val Verde Water Company, has been short-listed as a prospective supply source for San Antonio, which is looking to draw as much as 1.6 billion gallons of new water each year by 2018.