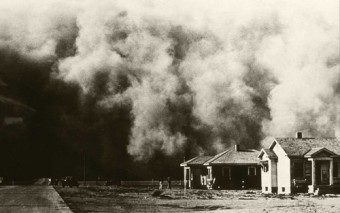 “Miles to water, miles to wood, and only six inches to hell.”  —Tim Egan, The Worst Hard Time: The Untold Story of Those Who Survived the Great American Dust Bowl Photo by USDA-Natural Resources Conservation Service. I captured this photo at http://www.texastribune.org/texas-environmental-news/environmental-problems-and-policies/drought-could-cause-rise-dust-storms/

This is how deserts are made.

First you churn up the land, scraping clean what grows there. You plant wheat. When the rain comes, it grows. When it stops, you turnover the deadened crops to plant more. You pray. And when the rain still doesn’t come, and the wind starts to blow, you watch as cattle and horses choke on the dust. It is no coincidence that the areas hardest-hit by the Dustbowl are responsible for the majority of drawdown on the Ogallala Aquifer, which waters a fifth of America’s cropland. This map is pulled from Timothy Egan’s The Worst Hard Time.

This is the story of the Texas Panhandle, once twenty million acres of grasses that grew so high, they brushed the saddles of the early Spanish explorers. All of that was long gone by the Depression, along with the bison that had ranged across the High Plains.

This was by design—kill the bison, kill the Indian.

For the sake of lasting peace, let them kill, skin and sell until the buffaloes are exterminated. Then your prairie can be covered with speckled cattle and the festive cowboy, who follows the hunter as a second forerunner of an advanced civilization. –General Sheridan, Texas Legislative Hearing, 1875

Moving settlers out to the former Indian lands took some marketing, though. Homesteaders moved west—to the Texas panhandle, to Oklahoma, to Kansas and Colorado—armed with government pamphlets on how to grow wheat.  In Texas, the land that wasn’t cultivated was used to run cattle that wore bare the land. By the 1930s, most of the grasslands that had once covered a fifth of the United States were plowed or trampled under.

But on the High Plains, the heartland stretching from Nebraska to Texas, this land was not made to grow anything but grass and buffalo. What the settlers and the government farm agencies didn’t know is that the years of settlement were unusually wet. Wet enough to grow wheat for less than a generation. What followed was a dry period that broke the backs of farmers and cattlemen across the plains, and which became known as The Dustbowl. An Eclipse windmill pumping domestic water supply on the XIT Ranch in Texas at the turn of the century. Courtesy Historical Research Center, Panhandle-Plains Historical Museum, Canyon, Texas. Picture from A Field Guide to American Windmills by T. Lindsay Baker. I captured this photo at http://www.agwt.org/Windpumps/EclipseWindmill.htm

What saved farming in the High Plains wasn’t Mother Nature. That wetter-than-normal period of the early 1900s never returned. What happened was the electrification of farming. With electricity, the windmills that drew water up from the Ogallala Aquifer, which runs underground from Texas to the Dakotas, were replaced by bigger pumps that could draw more water, faster. With industrial pumps, farming and ranching exploded across the High Plains. The quilt-like patches of soy, corn and wheat you see flying above Kansas and Northern Texas are only possible because of those pumps: a farmer may draw 5 to 6 feet of water from the Ogallala in a year when the aquifer receives only half an inch of rainwater. And it’s these pumps that killed the Panhandle springs.

It is hard to believe today, but the Texas Panhandle was once known as an Eden of the High Plains. There were grasses, yes, but there was also water. Mastodon hunters, Comanches, Spanish explorers all watered at these springs. Gunnar Brune’s Springs of Texas has a lovely map of the trail taken by Coronado in 1541, which followed Indian trails fed by their waters. Most of these springs are now completely dry if not severely diminished, along with the populations of heron, bear, panther and other animals that it is hard to imagine roamed these areas only a century ago. There is not much good news for the Ogallala or the Texas Panhandle. The amount of water pumped from the Ogallala is more than the annual flow of the Colorado River. With negligible rainfall over most of its territory, the aquifer has seen significant declines over the last 60 years—more than 100 feet in West Texas. And while agricultural equipment has become more water-efficient—using less water to deliver the same crop yield—this imbalance has not changed. During last year’s drought, increased pumping dropped the water table in the Texas Panhandle by an average of 2.5 feet—its largest decline in 25 years.

In 20 or 30 years, a third of the Texas Panhandle will no longer have enough groundwater to support irrigated farming.

This isn’t just a Texas problem—the Governor of Kansas recently announced his policy agenda for arresting the significant decline of the Ogallala, which is responsible for about 2/3 of the state’s agricultural output. And it’s not just a High Plains thing—the Ogallala irrigates about a fifth of the cropland in the United States.

So the restoration of the Ogallala is as much about the food we eat as the springs we swim in.

In October, I’ll be speaking again at the Society of Environmental Journalists, meeting this year in Lubbock. It is a far cry from last year’s venue in Miami Beach, with significantly less opportunity for moonlit skinny-dipping. But I’m excited nonetheless. I’ll be following part of Coronado’s trail through present-day Lubbock, Hockley and Cochran counties.

It will be the first step in what I hope will become a larger project to document the Ogallala as it is today, one of America’s most critical natural resources that is on the verge of extinction. It is shocking to me that this remains a little-known fact. But an aquifer isn’t a blue whale, or a panda. It is a hidden thing.

Documenting the failure of something so important is not enough. While I am there, I also hope to talk to some of the people working to protect and restore the Ogallala, so that I may also contribute to its restoration. The Devil’s Ink Well, one of the few remaining springs in Hockley County. Photo captured at http://www.webpages.ttu.edu/tkreidle/yellowhouse_ranch%20trip.htm