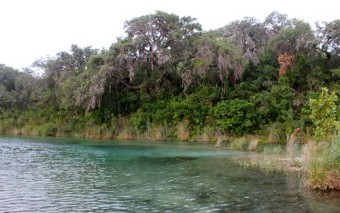 This river laughs. It dissembles for no purpose other than to delight, stretches of gin-clear shallows shape-shifting to emerald depths and back again, a sly wink as you round a bend and a pat on the rear as you are skipped down the stones of its riffles.

Floating along its surface you can look upward to see a raptor drafting above a sand-hued, cave-pitted bluff and then downward onto widemouth Guadalupe bass courting the white boulders submerged beneath you.

It is everything you dreamed a river could be, and because it hides itself from the world, you may have the complete and perfect joy of finding yourself there alone, pushed along insistently toward beauty. I was welcomed there by Sky Lewey, Resource Protection and Education Director at the Nueces River Authority. Lewey was raised in Uvalde, and when I complained that I had never seen water flowing in the Nueces, she invited me to camp on her ranch. I spent my night on a campsite overlooking the river as it passes by the rough hills of the Balcones Escarpment. These hills were blasted up from the seafloor in massive volcanic events when this part of Texas lay under the Gulf of Mexico. They are brutal in their beauty, and miles from anything. Even with my dog Henry, whose bravery illuminates the blurred boundary between fearlessness and stupidity, I was afraid to be alone in this landscape. I inquired about a campsite closer to her house and immediately regretted it. Lewey shamed me, as she was right to, and I stayed and am glad I did. But this is the sort of coddled thinking that keeps the Nueces so blissfully free of most outsiders, along with a very strange quirk of geology.

Like most West Texas rivers, the Nueces is spring-fed, its waters emerging from the ground along its length. And like most of its tributaries, it also disappears below ground for a stretch before resurfacing on its journey to Corpus Christi. The places where the river disappears are called “interrupted reaches”—the river is still there, but flowing underground through the karst limestone of the Edwards Aquifer. The serendipitous result, as Lewey describes it, is that most visitors passing through on Highway 90 have no idea what a wonderful river they’re missing, leaving it mostly to the locals to enjoy.

The Nueces is a wonderful illustration of the nonsense of our legal distinctions between groundwater and surface water. Officially, Corpus Christi is the largest drinking water user of the river. But in reality, the river is a major contributor to the Edwards Aquifer, drinking water source for San Antonio and flotation enabler for the tubing hordes in San Marcos and New Braunfels. The clean drinking water services provided by this river system are so important, the city of San Antonio is spending millions to conserve and restore ecosystems within the river’s recharge zone. And while there is much more work to be done to make up for years of bad land management practices, today’s river is in extraordinary shape compared to where it was even a decade ago. This is thanks to groups like the Nueces River Authority, which for years fought to limit the damage wrought by the leagues of four wheeler enthusiasts that flocked to Uvalde County every year. As Lewey describes it, hundreds of vehicles would tear across the river during regular four-wheeler jamborees, until the riverbanks had absolutely no vegetation left. What most people don’t understand is that a river isn’t just water flowing across a dirt bed—the plants that line the riverbank actually create steady water flows, by capturing rainfall and slowly releasing it over time. Without plants, the rain that falls moves faster downstream, depositing sediments as it goes and leaving behind a shallower streambed. The Nueces River Authority led the successful ban of four wheelers from the riverbanks in 2003, after attempts in three Legislative sessions—pretty much status quo for the Texas Legislature.

Since then, the native plants of the Nueces River Basin have begun taking root: gently nodding sawgrasses, white-orbed buttonbushes and stands of star leaved sycamores. Exotic species have come along for the ride, and the day I kayaked with Lewey we paddled past dozens of deadened arundo, a giant and pleasant-looking reed that will choke out everything in its path. The Nueces River Authority is partway through a Pull.Kill.Plant campaign to uproot this pest before it can wreak the damage repaired from the ATV apocalypse. A visit to the Nueces will require some orchestration. Those looking for a sedate experience can pull over at one of the many river crossings on 55 Northwest from downtown Uvalde, break out the barbeque and kids’ floaties and make a day of it. For the more active among us, the river is freely accessible for putting in kayaks at these crossings and a few other spots. We put in at the turnoff for the Friday Ranch on Route 55 and paddled downstream to 19 Mile Crossing, so named because it is 19 miles from downtown Uvalde on route 55. There are plenty of vacation rentals along the river as well, including Chalk Park Bluff.

For the first time in years, rainfall has gotten the flow rate high enough to make a great paddle with very small rapids totally safe for novices as long as you don’t mind gentle run-ins with trees. If you do this, make sure to take two cars, leaving one at your takeout point. The land bordering the river is private property, so stay in the river on your float—a nice side benefit of respecting the law is that you also minimize the pressure on the plants trying to restore themselves along the banks. Sky Lewey was recipient of the 2004 National Wetlands Award for Education and Outreach. Her acceptance speech is one of the most beautiful writings I have seen on rivers—I close with her words, which tell the story of this river far better than I could, a biography written by a lifelong friend of and champion of these waters:

The rugged canyons of the Upper Nueces Basin are a desperate land, where life clings to water; only a fine line separates wetlands from dry lands, cactus from ferns, and thorn bush from buttonbush. In drought I have watched great blue herons and buzzards huddled together around drying potholes in the river’s bed, one feeding on the live and the other waiting on the dead. A few weeks later, rushing chocolate floodwaters covered the same potholes. These are still—mostly still—natural rivers that run and flood and pulse and have their way with man. They are wetlands, special lands, and a resource I love. Help Preserve Hot Wells! Previous
On the San Marcos Next