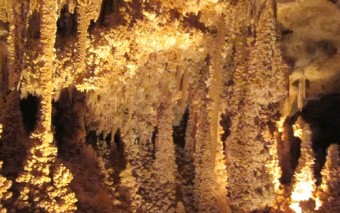 A forty-degree day in West Texas is cruel enough in February. In October, it’s a message to get gone. But in Junction, Texas there aren’t a lot of places to escape except below ground. So that’s what we ended up doing, Dad and Margot and I, and it is the first time I touched the waters of the Devil’s River.

A day before, we’d been tauntingly close to the real Devil’s, two hundred miles southwest of Junction in the rough lands north of Del Rio.  There the waters of the Devil’s run clear and cool thanks to the springs feeding its last forty or so miles. Up in Junction, it’s called the Dry Devil’s for the simple reason that it’s dry as a bone, at least aboveground—about a third of its length runs under the soil, a not uncommon occurrence in Texas.

And it’s the waters of the Dry Devil’s that form one of the largest cave systems in Texas, the Caverns of Sonora. Many years ago, the ancient Devil’s River was really an underground lake. But ours is an active planet, and thanks to the cataclysmic action of shifting continents that lake burst, draining itself out and leaving these underground caverns, which no one was brave or foolish enough to explore until a band of teenage boys crawled into the blackness about sixty years ago.

What they found was one of the most decorated cave systems in North America, miles of rooms with natural fretwork and chandeliers carved from sulfuric acid that forms when the rainwater percolating through the soil mixes with natural gas deposits.

The forms made by this underground Devil’s are a phantasmagoria of fish tails, soda straws, popcorn balls and flowstone, a sort of static lava flow. There’s even a pile of flowstone that looks like the biggest bowl of applesauce you’ve ever seen. Caves are always magical places, a through the looking glass view onto the earth you thought you knew. But this one is especially wondrous because it is both a cave and the headwaters of the most perfect river in Texas.