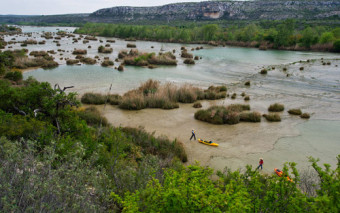 About a week back I finally voiced an idea I’ve been toying with for months: I want to paddle the Devil’s River. I have now professed this harebrained scheme to five people—three of them native Texans—and not a single one had ever heard of it.

Only 500 people a year paddle this river in far west Texas. The Devil’s starts in the desolate lands north of Del Rio and runs its course in Lake Amistad, a manmade reservoir of the Rio Grande split by the Texas-Mexico border. There are a hundred reasons I want to run this river. It’s the clearest, cleanest river in  Texas, fed by springs along its length. This is true primitive camping—only one or two designated campsites along the whole route, no bathrooms, no running water, no roads. Once you’re in, you’re in.

The spring names associated with this river are spectacular and often lurid, Big Satan being among the most memorable. Those wary of the dark lord may take comfort in knowing that Satan is the Latin term for catfish, most likely the spring’s namesake. But perhaps the most alluring feature of the Devil’s, the reason I cannot get this out of my brain, is that within the caves and cliffs lining the river hide rock art from about 4,000 years ago. The desert and isolation have preserved these pictographs in nearly pristine form, sparing pigments mixed by hunters and shamans 200 generations before us. For all the river’s allure, I have my reservations.

For one, the most I’ve paddled in a stretch is 21 miles. But that was in a single day. The navigable part of the Devil’s is only 32 miles, so the numbers may work out alright. (While the river is 90-some miles long, a full third of it snakes underground. On top of that, legal opportunities for putting in are limited, so the primary navigable portion is a third of its length). This is a whitewater river with falls, riffles and drops often obscured in so-called reed jungles. My prior paddling experience is on the Adirondack Lakes, the Elkhorn Slough of Monterey Bay and the St. John’s, as placid and benign floating as you could imagine.

Although there are a handful of websites out there instructing visitors on what to expect, Southwest Paddler the most useful of them, these are hardly comprehensive guides. Nothing like navigation guides you can get for the Blanco or Guadalupe from outfits like Texas River Bums.

Paddling the Devil’s is not recommended in the deep summer or winter, as the ruggedness makes the possibility of heat and flood a real risk. So I’m giving myself until April to plan this trip. Who’s with me?

Lead photo, sheep and pictographs borrowed here. The rest are from Texas Parks and Wildlife Department.

As in, to spring Previous
Uvalde Next