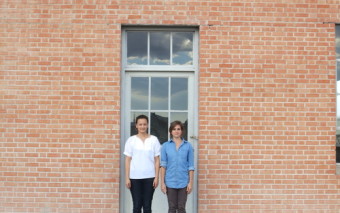 State Highway 17 connects two oases in far west Texas. At one end is Marfa, legend of American postmodernism. At the other, Balmorhea State Park and San Solomon Springs, last bastion of the Comanche Springs pupfish. And in between, some of the most spectacular landscapes in America. The town of Marfa was made famous by Giant (you remember this movie even if you’ve never seen it—picture James Dean covered in crude spurting from a Spindletop-scale gusher). It was made more famous by Donald Judd, whose Chinati Foundation is one of the true gems of American sculpture. Here, Judd’s concrete and metal boxes are much more than thought experiments on minimalism—in the vast and indifferent Chihuahuan desert they are truly human works, beautiful in their molded and polished precision. And while the landscape of Big Bend imbues Judd’s work with meaning, Judd endowed Marfa with a reason for anyone to make the daylong trek from anywhere. Without Donald Judd, it’s unlikely that today Marfa would be the sort of place where you could reliably run into avant garde glitterati or source antelope tartar. Yet few who make the pilgrimage across I-10 to find this oasis of hipster food trucks, yurt hotels and David Byrne sightings seek out an even more miraculous oasis only an hour’s drive to the north: San Solomon Springs. These springs are the outflow of rainfall on the Davis Mountains, which line the drive on Highway 17 from Marfa to Balmorhea, an ever-shifting landscape of grasslands, tight passes of high burgundy pillared rocks, and the yellow cottonwoods whose meandering path reveals a steady course of water flowing underground from the mountains to the edge of the valley below. Not long ago at all, the edge of this valley was a wetland watered by these springs. Those cienegas were drained and dammed by Roosevelt’s Civilian Conservation Corps, a loss made much easier to bear on triple-digit days when you can dive beyond the reach of the Texas heat, into waters so clear and rich with aquatic life, they are almost tropical. These springs are checkered with white soft-shelled turtles and black catfish, lustrous with the snub-nosed yellow Comanche Springs pupfish and the brilliant Pecos Gambusia. This may be one of only a handful of desert sites in the world ideal for scuba diving and snorkeling. And in fact, in the winter months, the pool is mostly occupied by scuba divers, free to explore the deep channel unassailed by diving board cannonballs. The day we went, there was absolutely no one else to be found in the pool—no divers, no swimmers, no state park rangers—really no one else around at all except for a tractor trailer towing a mobile home to its new owner. We shared the waters with a lone soft shell turtle, a big white long-nosed fellow who deftly evaded our approaches. To weave around schools of jewel-toned fish in pursuit of a turtle there, in the midst of a vast desert, is an incongruity not altogether unlike seeing some of America’s Most Important Art a few miles from the Big Bend Cowboy Church. And for this reason, San Solomon Springs is really the perfect twin to Marfa.

But while in Marfa you get the sense that there are two worlds living side by side that rarely come into contact—the West Texas folks who came from Big Bend and will always live in Big Bend, and the artists and designers and restauranteurs who are there on kind of a lark—in Balmorhea there is a remarkable interdependent relationships between two very important populations who depend on the waters of San Solomon Springs: the endangered Comanche Springs pupfish and farmers. Today, most of the waters of San Solomon Springs are captured at nearby Balmorhea Lake, dammed to store irrigation water for fifty square miles of alfalfa fields just north of I-10. Of course, harnessing these springs for irrigation is what has supported human habitation in the Madera Valley for centuries—the Jumano and Mescalero Indians used these waters to grow corn and peach trees. Modern farming made it possible for even more water to be diverted, which conspired along with the damming of San Solomon Springs pool to eradicate the wetlands that once spread spring water across the valley. Those wetlands may have been permanently lost, were it not for the Comanche Springs pupfish, which now live nowhere but Balmorhea. As may be evident, these fish were also once about an hour’s drive east at Fort Stockton’s Comanche Springs. But thanks to over-irrigation from Fort Stockton farms, the pupfish have long-since died out there, leaving only Balmorhea to host this endangered species. The eradication of the pupfish at Comanche Springs came well before the Endangered Species Act (ESA) was passed in 1973. Had a version of that law been in place earlier, Comanche Springs might still be flowing, as the ESA is the most powerful of all federal laws when it comes to shutting off human water supplies. But in the early 1990s, with the threat of losing water from San Solomon Springs, Texas Parks and Wildlife and area farmers agreed to a fairly unusual arrangement—to reconstruct some of the wetlands that once blanketed the Madera Valley to ensure that both pupfish and farmers could get the water they needed. Today, below the outfall of San Solomon Springs pool, old irrigation canals channel the water to a three-acre recreated cienega, designed exclusively to host the endangered Comanche Springs pupfish and the Pecos Gambusia. As you can imagine they once did when wetlands extended much farther across the Trans-Pecos desert, these waters attract dozens of species of migratory birds, an astounding diversity of ducks, loons, herons, gulls, hummingbirds, hawks, owls, woodpeckers, flycatchers—so many species it strains the imagination. If a peaceful coexistence between farmers and fish can be cultivated here at San Solomon Springs, why not elsewhere? I think we will see more of these arrangements in Texas—not just for fish but for birds and salamanders and all other sorts of aquatic species across the state. And who knows, maybe one day we may again swim with pupfish at Comanche Springs.