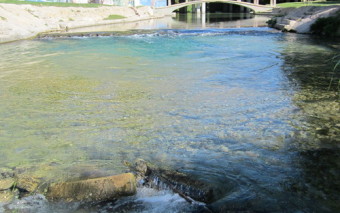 The same is true of places.

And when you see a person and a place transported together to that earlier time, the fog of the petty and mundane lifts to reveal life.

This is what I saw when I went to Del Rio. My father moved to this border town in 1939, at the age of 8, when his dad acquired the local newspaper, what later became the Del Rio News-Herald. This was the first of grandpa’s many acquisitions of local media in Texas—he would later spend more than a decade as owner of KMLW in Marlin, itself home to a mineral spring rumored to cure everything from asthma to syphilis.

While Del Rio is a storied place, most of those stories are hidden from the ordinary passerby. Driving west from San Antonio on 90, there is not much to greet the casual traveler beyond the drive-thrus and big box stores typical of most West Texas towns.

But if you manage to journey off the main drag, say to East Ogden Street, you can see the motel where the family boarded before they moved to 1310 Main Street, freshened by a new coat of paint but shadowed by the 297 overpass. You can drive by the house of the town’s most famous inhabitant, Dr. Brinkley, who replaced the prostates of ailing men with goat glands. Dr. Brinkley may have made most of his money selling the promise of virility, but his diversified revenue stream also included autographed photographs of Jesus, sold via Station XER-AM, which broadcast from a few miles across the border in Villa Acuña. And if you see a park on 90, just east of the intersection of 277, pull over. Here you can swim in the waters of the San Felipe Springs, one of Texas’ most prolific spring waters and the only spring in Texas that still serves as municipal drinking supply. These springs can produce 90 million gallons of water a day, enough for the town of Del Rio and nearby Laughlin Airforce Base. Thanks to 9/11 and fears of water poisoning, the springhead now is strictly off-limits to regular people. The first mile or so flows through the San Felipe Country Club golf course, but not long after, the regular Joe can avail himself of this mysterious river. That’s what we did, just as my dad had done 70 years ago. He swam here when the country was still in the nadir of the Depression, in the Dust Bowl, in the thick of WWII, in the celebratory months following VE Day and VJ Day. Desert naturalist Craig Childs writes about tardigrades, miscroscopic creatures that thrive in extreme environments: deprive them of water, and they will crystallize and wait for the day when water comes again. There are accounts of some that sprang back to life after hundreds of years of deprivation. That’s what I thought of when I saw my 82-year old dad, who wasn’t about to wait for my sister and I to find the gentlest entry point. After 60 years away from these waters, the man was ready. Before we could even round the bend, there was Dad, stripped down to his swim trunks. The days of diving from the bridge may have passed. But as my Dad stood there in the waters of the San Felipe, I saw him washed free of the years, a little boy whooping while the train roared overhead.