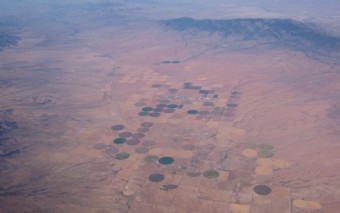 There are plenty of people in this world I can’t understand. Somewhere near the top of the list are the ones who choose not to take the window seat.

Look out the window on a flight from Austin to San Diego, and you will see a peculiar form of mirage: a sea of farmland in the middle of the Chihuahuan desert.

Like any mirage, this one will soon disappear. Growing cotton or alfalfa in a place that gets an inch or two of rainfall a year, hundreds of miles from any canal system, just doesn’t happen unless you have one thing: a nice deep well to pump groundwater. And whether it’s in the Chihuahuan desert, or the Sonoran desert, or the soon-to-be-deserts of the Texas Panhandle and California’s Central Valley, that water is being taken out far more quickly than it’s being replaced. While millions of gallons of water are pumped out to grow crops, the number of gallons entering these aquifers through rainfall can be counted in the thousands. After at least sixty good years of groundwater pumping, this era of the fertile desert is coming to an end. In the next few decades, the major aquifers that have fed and clothed us are expected to fail. In some places, this is likely to happen much sooner than official estimates might suggest. One of those places is the Texas Panhandle, where parts of the Ogallala Aquifer that are being managed to depletion by 2060 are being drawn down at a rate at which exhaustion can be expected closer to 2030.

Over the last week I’ve spent a lot of time with journalists, ranchers, financial analysts and water tech investors. I have an awful lot of hope that we can prevent a world water crisis. But I am still mesmerized by these mirages, by the green patchworks that will be worn thin, wondering when it will be that I will look at the window and see only desert.