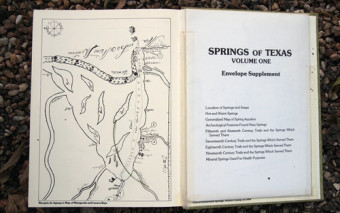 You know how they say space is the last frontier? Some people think we’ve charted everything there is to chart on earth. Well I say that’s plain wrong. We are surrounded by forgotten wonders—places and sights that other humans have known, but which have been lost by the spans of generations. Their rediscovery is the most human of human endeavors, because they remind us of where we came from and foreshadow where we might be going.

But sometimes it’s hard to know where to start rediscovering them. Even though I knew Texas has been called the land of 1,100 springs, somehow I still couldn’t believe just how many Gunnar Brune mapped in his life’s work, The Springs of Texas: Volume 1. I mean, dear Lord, this man must have had no free time at all. But while Brune wanted to document every single seep and spring in the state, I just want to swim and soak and tube and scuba. That narrows down the set. But not as much as I had hoped.

After a day or two of putting on airs of scientific rigor, I’ve decided that the only legitimate approach to this task is to have as much fun as possible.

Because really, as I looked through Brune’s maps, I realized there are a million trips waiting to be had, too many for one lifetime. Trips to ferny glades and underwater caverns! To tropical dive sites landlocked by desert! To the mausoleums of springs that once cleansed syphilitics and cured consumptives! Could you imagine anything more romantic than following the trails of the early Conquistadors to document the springs as they exist today? Me neither. Over the next couple of weeks, I am going to chart out some of the grand tours I’ll be taking this year.

I am using Spotsi to map road trip ideas, so if you have any places to share please send them along and I’ll add to the set.

Here’s to going where generations of man have gone before. Photos in this post courtesy of Maura Grace Ambrose.

Jacob's Well / Blue Hole Previous
War of the Worlds Next