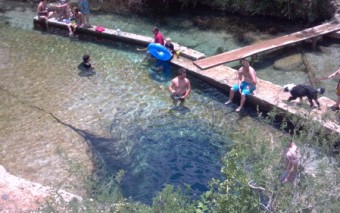 Here is what you will find, searching for springs in Texas: the best of them are hidden. They are surrounded by baking earth, cloaked in the white noise of cicadas, circumscribed by paths that run their course in dry creek beds. Search for them on a truly blistering day, and you will realize what weak stuff you are made of, how quickly your sense of adventure melts into a rising panic, and panic into despair.

That is precisely what happened upon my approach to Jacob’s Well.

Maura, a fast friend and fellow swim nut, had tipped me off to this wonder tucked in the town of Wimberley. She had visited a few weeks before for an early morning swim, arriving to find only a father and son sharing the silence and cool. It was a magical encounter, she said, I imagine the kind when you are able to catch sight of all the years that will pass between two people, and if only for an instant to feel part of the meaning they will create together. But too late in the day, she warned, and it would be overrun with teenagers challenging each other to increasingly reckless catapults into the well itself from the surrounding rocks.

One particularly hot Sunday, I set off for the well with a few friends visiting from the east. We took with us some final words of advice from Maura on where to find it—look for a small street off Jacob’s Well Road called Woodacre, where behind a chain you’ll see a service road, and down that road, the well. It seemed simple enough, and to make it even more straightforward she had the good sense to pin its exact location on Google Maps. Foolproof.

In the midday sun, measly minutes of scouting distorted into hours. A congenital catastrophist, I managed to invoke the following disaster scenarios: one of us would be bitten by a rattlesnake, a scorpion, would be stung by the wasps that had set up camp in an abandoned beehive near one of the many paths that led to nowhere. We would wander onto someone’s property and be shot. Most likely, my friends would be disappointed with me for leading them out to the middle of nowhere only to find nothing when I had promised them a magnificent something.

While usually I am disgusted by my tendency to imagine the worst, I heartily recommend buckling to these impulses when approaching a spring for the first time. Fearing that you will never find the spring—that it has dried up or that you have misread the clues to its location—is entirely appropriate and perhaps even necessary to understand the meaning they hold.  Whatever terrors or consternation you manage to call up, it is most definitely small potatoes compared to what people must have felt before there were cell phones and gas stations and icee pops. Imagine that you are an ancient Huichol hunter, or a Spanish conquistador, or a settler uprooted from the Appalachians. Imagine you are a thirsty animal in search of water you may not find.

In such circumstances, any fresh spring would be cause for thanksgiving. But for the generations of travelers who discovered Jacob’s Well, it must have held a special mystery. For while most springs bubble up from small fissures in the rock or stream from cliff walls, the waters of Jacob’s Well rise from a near-vertical shaft sluiced through the limestone encasing that portion of the Trinity Aquifer. The shaft, about twelve feet in diameter, appears to bottom out around twenty feet down. The gravel bed of the well can be seen clearly from the surface, a mystic aquamarine. A person could be forgiven for believing that the well had been dug by God himself to quench the thirst of the wanderer.

Around the waters of the well, the scrub and rock of the landscape shifts abruptly to a profusion of greens. But in spite of this riot of life, there is something foreboding about Jacob’s Well, a possibility of entrapment in its blue depths that even early visitors must have sensed. What appears to be the bottom is not the bottom at all, but the entrance to a warren of underwater caves that have never been fully charted. When Gunnar Brune published the Springs of Texas in 1981, the well had claimed enough lives to put it off-limits for divers. Since then, a local society has revived diving expeditions to fathom the spring origin, the first series of dives occupied with the solemn task of excavating the remains of divers lost within the entrails of the well.

There is something about the aperture itself that suggests death—swimming across its mouth I could not shake the image of the flow reversing course, my body being sucked down into its depths. My east coast visitors may have been paralyzed by the same dark visions, and preferred to look into its heart from the safety of the ledge. But I was determined to swim, and borrowed courage from a pack of children who shrieked and splashed and swam across its mouth like it was a neighbor’s pool.

Looking at this mysterious upwelling, it is easy to imagine that it is permanent, somehow sacrosanct from the extreme dryness of its surroundings. In reality, Jacob’s Well, fed by rainfall, is subject to natural and manmade forces alike. Brune’s catalog of half a century of spring measurements demonstrate the degree of variability the well can experience—from a high of 170 liters per second in 1924 to a low of 68 lps in 1955, in the depths of the last drought of record. I think Brune would have been chagrined to learn that the well actually ran dry during the drought of 2000. I have not found any record of its flows during the even more severe drought of 2011, and eagerly await word from you if you know how it fared during that period.

Of course as the springhead goes, so go the waters it feeds. Jacob’s Well is the origin of Cypress Creek, a lovely little thing rudely disrupted along its path toward downtown Wimberley by a century’s worth of road improvements. Maura had imagined it might be ideal for guerilla tubing, but the thick blooms of algae collecting around each bridged road dissuaded me, as did No Trespassing signs strung across its breadth as we approached town. The truly motivated can engage in some micro-kayaking for a few hundred yards—up to you whether that is worth the launch. Further downstream at Blue Hole regional park, Cypress Creek runs clear again and is as easy and welcoming a place as you could hope for. You may have to stand in line at the sleek new visitors center, and entry will cost you $8 a person, but I promise you will get every penny’s worth while you float past the cypress toes lining both banks. The rope swings are in tip-top shape, the tanning lawn downright croquet-worthy, and the mirrors in the bathrooms real glass, not those hand-beaten metallic sheets redolent of The Bird Man of Alcatraz.

At Blue Hole, we forgot death borne by black tunnels and parched earth. Life was easy, cradled in our inner tubes. I expect that somehow in that easiness we forgot some about the preciousness of life. To remember that, we’ll have to return to Jacob’s Well.