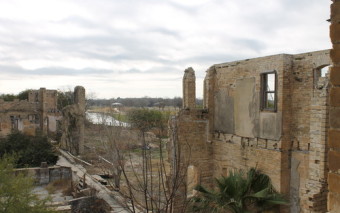 In early 1900s Texas, taking the waters was a universal pastime. Society members frequented Mineral Wells near Forth Worth, while syphilitics preferred the palliative waters of Marlin’s springs. And if you were a movie star, a Senator or a magnate of any sort, you went to Hot Wells. A month ago I did just that, alighting there on the vague notion that a friend of a friend knew someone who lived there. What that meant, we couldn’t quite figure out—the place had burnt down in a succession of fires, and stood in ruins amid the industrial decay of South Presa Street.  But there we were, surveying Hot Wells behind a barred railroad crossing, a distinct smell of sulfur on the breeze. We had come to see a vestige of San Antonio’s past—what we saw was a glimpse of a future that may make it the greatest city in Texas. In the days of Hot Wells, human settlement in San Antonio still oriented itself to the river. The river was its reason, an axiom made evident by the string of Spanish missions lining its banks from the Alamo to Mission Espada. The San Antonio River was a real charmer too, all lush banks and graceful bends shaded by the prettiest of shade trees. Aside from the hot baths, the steam-heated rooms and the fine china, Hot Wells’ great appeal was its position on the river, across which visitors could take their daily constitutional via a swinging bridge that led to Mission San Jose. But in the era following Hot Wells’ decline, another logic imposed itself on the city—the logic of the automobile. Expanding outward, the city turned its back on the river, on the missions and the German colonial limestones, on the Victorian cottages and the industrial yards of its past. The river itself changed beyond recognition during those years, channelized midcentury by the US Army Corps to resemble little more than a drainage ditch. Even the water coursing through it changed—no longer spring-fed, thanks to agricultural irrigation on the city’s western flank, the riverbed became a channel for the city’s recycled wastewater, treated in the south and pumped upstream for release in Brackenridge Park. The riverbed just downstream of its origin, the Blue Hole spring, which has not flowed for many years. The empty well can be seen on the campus of University of the Incarnate Word.

Hot Wells was just one of the places forgotten and wasted in this explosive sprawl. But thankfully, it is also one of those places being rediscovered by a city that forgot itself. Central to this rediscovery is the restoration of the river from a backwater drainage ditch to a recreational corridor along the city’s length. Museum Reach, the northern segment of this corridor, now links the downtown core to Brackenridge Park, past art museums and reopened breweries and urban condos that are probably the first high-density development the downtown has seen since the 1920s. The second phase, Mission Reach, is more ambitious still—nearly ten miles of reconstructed river from the King William neighborhood to the southernmost Spanish mission, Mission Espada. It is on this southern corridor that Hot Wells sits, a few miles south of Blue Star Arts Complex, the contemporary art center that is now the gravitational center of South Town. So it is fitting that the man who now owns Hot Wells was part of the team that remade Blue Star. On top of the many challenges that accompany redevelopment of abandoned property miles from any other destination is the unfortunate but necessary reality that since its heyday the waters that flow at Hot Wells have become highly regulated. Like the Blue Hole that once fed the San Antonio River, the sulfurous water at Hot Wells comes from the Edwards Aquifer, the vast underground reservoir that stretches from the Mexican border to San Antonio. But somewhere in the few miles that separate the once crystalline and pure waters of the Blue Hole from Hot Wells, the water becomes unfit for anything but a good soak. This is the “bad water line” of the Edwards, the area in which the aquifer descends to much deeper, warmer and more mineral depths. And only the Edwards Aquifer Authority has the right to approve who taps those depths, whether on the good or bad side of the water line. The northernmost reach of recycled water released into the San Antonio River, beneath an underpass in Brackenridge Park.

But if there is anything right with the world, Hot Wells will once again greet visitors to soak in its sulfurous baths. That day may be a long time coming for the general public, but thanks to kismet and the graciousness of Hot Wells’ caretaker, Justin Parr, the waters were free for the taking the day of our visit. Parr, as besotted with Hot Wells as befits his role, is a sort of frontiersman of urban ruin, hewing from its wreckage a homestead of such romance and dearness, we could hardly bear to leave. I hear there are good parties to be had at Hot Wells, dinners in the garden and dances in the ladies’ dressing rooms. And maybe if you’re lucky, a good soak. Previous
From the Devils to the Panhandle Next