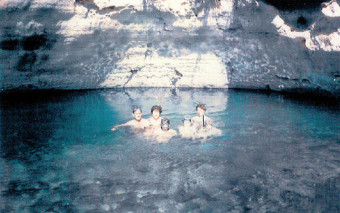 Like humans, springs are mortal. The cause of death may be natural or manmade, over decades or eons.  Though on rare occasion, they are buried alive. Swimmers at Goodenough before the construction of Lake Amistad. Source. A pre-inundation view of the rock outcroppings that sheltered Goodenough Springs. This area is rich in prehistoric rock paintings, some of which were surely lost to the Mexican-American water project built in 1968. Source.

Such is the case of Goodenough Springs. Once the third largest spring in Texas, Goodenough is now entombed beneath Amistad Reservoir, a dammed section of the Rio Grande straddling the Mexican border and frequented by the power boating set. Today the only sign of Goodenough is the buoy installed by the Goodenough Springs Exploration Project, a volunteer diving consortium of the most steely-nerved men you’ve never heard of. A view of Lake Amistad in October 2012, much diminished by drought and the necessary delivery of water to Mexico. Picture is the author’s.

For more than a decade, the members of GSEP have been charting the depths of Goodenough Springs and tallying some of the deepest recorded cave dives in the world. This is not recreational diving—the springs lie beneath more than 100 feet of lake water, a descent into murkiness well beyond the reach of the desert sun. But it’s at the spring opening where the real work begins. At its peak, Goodenough Springs produced 80 million gallons of water a day—nearly 60,000 gallons a minute forcing its way out of the earth. And although the spring’s flow is diminished by the pressure of Lake Amistad, it is still prodigious, an unrelenting force against divers attempting to penetrate the cave system. The first divers who explored the spring had to wedge their bodies into cracks in the smooth rock walls to drag themselves against the current, going as far as they could before their muscles failed and they were sent downstream. Those who could make it past the main room discovered another tunnel leading even further into the earth, dubbed the Fire Hydrant Tunnel for the shear currents that tore the respirators off divers’ faces. (If you enjoy the feeling of panic, help yourself to a reading of the history of diving at Goodenough Springs.) This gauntlet seems not to have acted as a deterrent so much as an enticement, the tenacity required to breach the cave’s obstacles and outwit its booby traps creating a momentum of its own for the divers who dedicated many hundreds of hours and thousands of dollars installing infrastructure capable of supporting deeper and longer dives.  Over the years, with the help of guide lines installed foot after brutal foot, GSEP has charted dives down to 515 feet below the surface of Lake Amistad—the deepest cave dives ever registered in the U.S. Remarkably—given the depth, the force of the water and the lack of visibility—there are no recorded deaths at Goodenough Springs, a testament to the skill and care of the dive teams. A diagram of Goodenough Springs drawn by one of the first divers to explore its depths. Source. Divers installed a “tombstone” death’s head warning of the perils of entry. Here, the tombstone is partly obscured by gravel routinely pushed through the caves by the force of the springs’ flow. In a vivid illustration of the connections between water above and below the ground, Hurricane Claudette in 2003 blasted out a large gravel obstruction partly dug out by GSEP divers, allowing access to deeper sections of Goodenough. Source.

Yes, the Goodenough Springs Exploration Project is a lesson in cajones. But it’s much more than that—it’s a lesson in the enduring mystery of springs. After a decade of exploration, we still don’t know where the water feeding Goodenough Springs comes from or where it goes. In a region of Texas just rotten with spring activity, Goodenough is an oddity. Its water runs 14 degrees warmer than nearby San Felipe, Fort Clark or the coldwater springs of the Devils River, suggesting a much deeper source. Despite some evidence that the flow at San Felipe, just twenty-odd miles southeast, increased after Goodenough was smothered by Amistad, too little data exist to say with confidence that the two springs are in fact connected (and it’s a fair question of any thermodynamics enthusiasts out there whether water traveling such a short distance would lose so much temperature under any condition).

We mortals will have to wait for the answers to these existential questions until Goodenough Springs once again admits visitors. In 2010, a biblical flood brought 22 inches of rain in 24 hours just across the Mexican border from Lake Amistad. This atmospheric anomaly, called a supercell, offered a gem of a clue to Goodenough’s origins. For since that epic flood, the torrent blasting out of Goodenough Springs has made entry absolutely impossible—GSEP member Gregg Tatum describes divers trying to pull themselves along the guide lines like flags flapping in a hurricane. From outside the tunnel entrance, divers could hear a jet-engine roar coming from the main room, the sound of a caged maelstrom. And for the members of the Goodenough Springs Exploration Project, that’s probably all the more reason to try again.