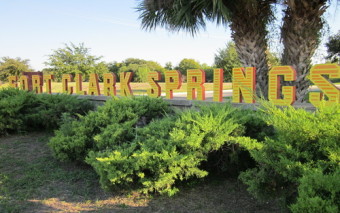 Driving Route 90 West from San Antonio, there’s not a whole lot to draw the eye other than wind turbines and border patrol surveillance stations. So pressing on to wherever you may be headed, it would be easy to overlook the calico signs advertising Fort Clark Springs. But I suggest you make your best effort to slow down and try to talk your way past the guard booth, for what lies past the low stonewalls here is an absolute treasure.

Fort Clark was a major military installation before the era of mechanized warfare. From here, the United States Army executed its operations in the Civil War and the Mexican-American War and various Indian skirmishes. When cavalries gave way to tanks and warplanes, Fort Clark was left with nothing but its name, its frontier barracks and its spring, Las Moras. Like its nearest neighbor, San Felipe Springs, Las Moras is a gusher. It is the reason why the fort was located here, and not say 100 miles to the east, along the banks of unreliable rivers. But while the waters of Las Moras are as clear and cool as the waters of any other Texas spring, they are not the main attraction. The waters of Las Moras are so controlled, augmented and manipulated you could excuse the average passerby from assuming they were just the outfall of a municipal pumping system. When I visited, the pond at the springhead was covered by a scum of grass clippings and algae, its little fish hardly visible from the concrete banks. From there the water is divided and diverted, some of into an irrigation canal, but most of it into a gigantic WPA-era swimming pool. Keep your expectations in check, this no Barton Springs. This is an acre of concrete filled with spring water. Nearby banana trees give the whole thing a strangely Central American vibe. But believe me, when the air is 105 in the shade, this water must be paradise. On the day we visited, the balmy weather must have been too cool for most locals, giving my sister and I the entire pool to practice our synchronized swimming routine. The sense of a communal care for the past and a self-charted path from the present was very close at hand here. In deep West Texas it was strange to realize that the place I was most reminded by was Copenhagen’s Christiania, itself a former military complex. Now, I imagine that unlike Christiania, which since the 1960s has been allowed to operate as an anarchic community outside the bounds of Danish law, the laws of Texas still hold here in Fort Clark. But wandering across these grounds, past the horses in their stables and the trikes and mislaid toys scattered around buildings where Civil War officers once lived, I felt unbound from the baneful logic and predictability of the world. The springs at Las Moras are only accessible to guests and residents of Fort Clark Springs, but if you’re a smooth talker you might get in.