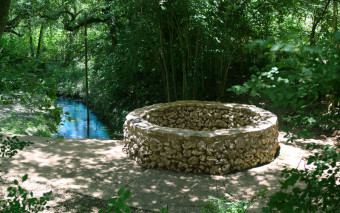 As if the sky during its emergence

—when it bubbled its way up out of the sand,

cooled and then sublimed into vapor

that blued the dank grey of the atmosphere—

left a residue of cobalt behind to remind

from where it had sprung into existence,

the water rising from this spring

appears unearthly, as only things

close to earth, born of earth, can:

its blue deeper than the heart of a sapphire.

Today, when faced with such a spectacle,

we have, as usual, only two choices:

the paralysis of awe, or the quick nonchalance

of acceptance. But what about the Spaniards

who came upon this spring before there was

a platform lined with inner tubes, before

there were wooden walkways elevated to slow

their impending rot, before there was a faux beach,

its sand stolen from the spring’s center?

Did they run in with their clothes on

convinced that this was the fountain of youth?

Did they laugh believing themselves

That afternoon, late summer, we did not swim,

chose instead to wander out to the edge

of the walkway, not a word between the two of us,

only the wind. Unlike us mere mortals, the trees

had long since been impressed,

preferring, instead, to maintain postures

incompatible with the work of sycophants.

Source: The Day Underneath the Day (TriQuarterly Books, 2001)