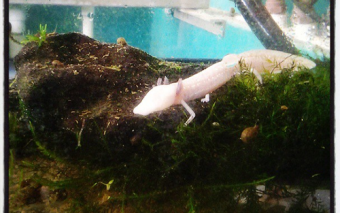 Some photos from my trip to the San Marco Aquatic Resources Center, whose mission is to sustain healthy populations of the endangered and threatened species found in the springs of Texas. They’ve got a little of everything here—salamanders from Barton Springs, Devils River Minnow from Pinto Creek, and of course (drum roll) the blind salamanders of Comal and San Marcos Springs. For those not in the know, the blind salamander is one of several endangered species whose dependence on constant spring flow was the basis of the lawsuit that led to a federal judge ordering reductions in groundwater pumping by San Antonio Water System, San Marcos, New Braunfels and irrigators across Uvalde and Medina Counties.

I have to admit it: I’ve got a soft spot for these weirdos. In real life they are totally transfixing to watch, with translucent faintly purple-white bodies, a rich purple fan of gills around their necks and yes, no eyes. Well, as I learned today, they do have vestigial eyes underneath the skin, but they’re not good for anything more than front ballast. The salamanders that ended up here are the occasional few who got caught on a rip tide and pushed out of the aquifer into observation nets—their new mission in life is to reproduce in captivity so a new population can be introduced to the aquifer in the event of an apocalyptic drought. No shortage of controversy when it comes to this place—I hear there is a fair amount of harrumphing over the $1.6 million cost (roughly 1% of the 7-year budget for the Edwards Aquifer Conservation Management Plan adopted earlier this year after 20 years of negotiation). I chalk that up to irritability over the U.S. Fish and Wildlife Service telling the locals they have to curtail use (really though, it wasn’t FWS, it was a federal judge, but for most Texans anything with federal authority is equally accountable).

Is it ridiculous that we’re spending millions of dollars to sustain a species as silly as the blind salamander? Yeah, kinda. But I think it’s even more ridiculous that we have yet to implement a law that protects water supplies for future generations of humans—and in the absence of that, I’ll take an endangered species trigger any day.