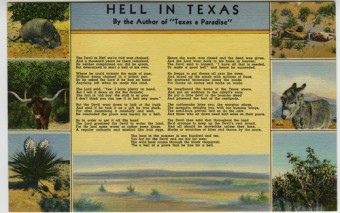 It started with turning 32.

Really it started before then, sometime in 1939 when my dad moved to Del Rio, Texas. My grandpa had just bought a newspaper, which he named the Del Rio News Herald, and moved the family from Illinois. This was the Depression, and the Dust Bowl was still pushing farming families westward in search of water. My dad’s family weren’t farmers, they were shop owners and butchers and salesmen. But for my dad, the meanness of the land captured his imagination and never let go. Today at the age of 82 he can tell you the name of the cave where his boyhood friend lost a leg to a rattlesnake, the ranches where he would practice shooting armadillos from horseback just because, and the springs where he would seek relief from the dust storms that kicked up in the deep drought of the fifties. The man remembers just about everything, but when I told him that my 32nd birthday intention was to visit and document Texas’ natural springs, I was dumbfounded when he recited verbatim a poem he remembered from an old postcard. My dad being my dad, he of course still had it buried in some box in a crawlspace somewhere (god help and keep my mother).

Hell in Texas seemed a pretty good metaphor for the state as my dad remembers it, and for the land I’m rediscovering. Since my dad first moved to Texas in the thirties, many of this state’s natural wonders have been lost to development and irrigation. Today, the coming population boom and the possibility of a new era of permanent drought in some parts of the state make it likely that many more may be lost. I hope not, and will not succumb to docile fatalism. They deserve to be fought for, to receive the best of our industry and our ingenuity in the service of their protection, for the very simple reason that they protect us. For millennia they have kept this unforgiving land habitable. I hope that by sharing their beauty, others will also be inspired to protect them and to regard water—whether it flows from a springhead or out of a kitchen tap—as a precious gift worthy of unyielding vigilance and care.

I am indebted to Gunnar Brune, author of the authoritative guide Springs of Texas, the first volume of his uncompleted two-volume series. A posting of this out-of-print masterpiece on Amazon.com says that another springs enthusiast, Helen Besse, is gathering material for the second volume, which will complete this compilation of springs living and dead across the state. I hope to meet and learn from her some day.

For all the times when we struggle to create meaning in our lives, it is comforting when circumstances arise that mark out a pathway in our wanderings. Gunnar Brune self-published his work in 1981, the year I moved with my family to a house just 15 miles away from Brune’s home in Arlington, TX.

So I’m dedicating my exploration of the springs of Texas to my dad, who I know is satisfied that I am once again a Texan, and to Gunnar Brune, my fellow lover of springs that flow and solemn eulogizer of the springs we have lost, and to all of those I passed while floating down the Lazy River at Wet ‘n Wild: I hope that one day you realize as I have that the water that flows out of the earth beneath our feet is the only true relief from the hell of Texas.

The Devil in Hell we’re told was chained,

And a thousand years he there remained,

He neither complained nor did he groan,

But determined to start a hell of his own.

Where he could torment the souls of men,

Without being chained in a prison pen.

So he asked the Lord if he had on hand

Anything left when he made this land.

The Lord said, “Yes: I have plenty on hand,

But I left it down on the Rio Grande:

The fact is ‘old boy’ the stuff is so poor

I don’t think you can use it in hell any more.”

But the Devil went down to look at the truck

And said if he took it as a gift he was stuck,

For after examining it carefully and well,

He concluded the place was too dry for a hell.

So in order to get if off His hand

The Lord promised the Devil to water the land,

For He had some water or rather some dregs,

Hence the trade was closed and the deed was given,

And the Lord went back to his home in heaven;

The Devil said to himself, “I have all that is needed,

To make a good hell” and hence he succeeded.

He began to put thorns all over the trees,

And mixed up the sands with millions of fleas.

He scattered tarantulas along the roads;

Put thorns on cactus and horns on toads.

He lengthened the horns of the Texas steers,

And put an addition to the rabbit’s ears;

He put a little devil in the broncho steed

And poisoned the feet of the centipede.

The rattlesnake bites you, the scorpion stings,

The mosquito delights you with his buzzing wings,

The sand-burs prevail and so do the ants

And those who sit down need half soles on their pants.

The Devil then said that throughout the land

He’d arrange to keep up the Devil’s own brand,

And all should be mavericks unless they bore,

Marks or scratches of bites and thorns by the score.

The heat in the summer is one hundred and ten,

The wild boar roams through the black chaparral;

‘Tis a hell of a place that he has for a hell.