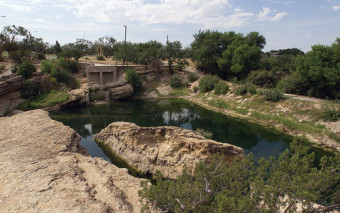 I have a fascination with all springs, including those whose time has passed.

I’ve been collecting a short list of the big ones, and somewhere near the top was Big Spring, in the West Texas town with the same name, whose waters apparently went dry in 1917. Last I heard, the water situation in Big Spring was bad enough, the town had built a wastewater treatment system in 2013 that turns sewage into drinking water—the first so-called “toilet to tap” system in Texas.

Now imagine my confusion when I googled and found pictures of a place called Big Spring that appears to still have water.

What’s the story of Big Spring? Is the water still flowing naturally, or is this a clever recycling or pumping project to sustain the town’s namesake?

If you have a read on this, please let me know.