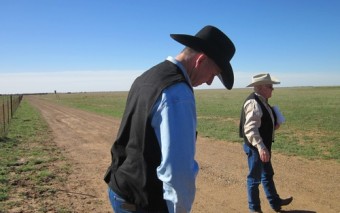 The Texas Panhandle’s not a place where most people expect to find springs. This is Dust Bowl territory. It’s cotton growing, oil pumping, 100,000 acre cattle ranch land. It’s where you can still see last year’s drought in the mud-choked reservoirs and on the faces of the cattlemen who lost half of their herd.

But in the face of this deprivation, there are places where water still wells up from the land. One of these places is the Matador Ranch in Motley County (hard to see in the picture below, but it’s in one of those counties where the peach of the Ogallala sand aquifer collides with the light blue of the Triasssic Dockum sandstone). Two weeks ago I was lucky enough to tag along with the Society of Environmental Journalists on a trip through the Matador Ranch, to hear Ranch Manager Bob Kilmer and his staff talk about their experience of the worst single-year drought in Texas’ history. The ranch is right near the town of Roaring Springs, a place like many others in America where the name has outlived its inspiration. But against all expectations, the Matador has hung on to a couple of gems: Ballard Springs and the Blue Hole.

Ballard Springs is named after a legendary buffalo hunter who camped here in the 1870s. This land is savannah, the waist-high grasslands once grazed by the south plains native buffalo and antelope. The European settlers who came to these parts exterminated those herds, eventually replacing them with their own livestock. Cattle filled in for the native grazing animals that once maintained the grasslands, preventing scrub and brush from expanding across the range. And in this way, the grasslands of the Panhandle have held on over time. But while the ranch operations here are hardly CAFOs (Concentrated Animal Feeding Operations)—Matador typically runs 4,000 head of cattle on 130,000 acres, a headcount that’s been cut in half by the drought—the native grasses still don’t have enough resting time between cattle rotations to reach their once-storied heights. While all of this may seem like a bit of a diversion, grazing animals, grasses, scrub brush and springs all go hand in hand. Like many ranches, Matador tries to control the growth of juniper, mesquite and cedar—brushy trees that demand quite a bit of water compared to grasses. Clearing brush frees up water in the soil that would otherwise be captured by roots. Clear enough brush, and springs start to flow again. It was after a big brush clearing that the Blue Hole filled back up, a great joy to a rancher who otherwise has to pump groundwater hundreds of feet to the surface to water his cows. And probably even a greater joy to a ranch hand who after a day’s work in the dust and the heat wants nothing more than to swim in those spring waters.

I never did see either Ballard Springs or the Blue Hole (this was a tightly circumscribed operation, accompanied by a detail from the Motley County Sheriff’s Office for reasons none of us were terribly clear on at the time, though I later learned it was meant to calm traffic on the lonely Farm to Market roads). But I did hear Ballard Springs pouring from beyond an old, broken down springhouse. I’ll be honest, it was everything I could do to not climb over the fence separating our lunch party from the spring. But Mr. Kilmer was kind enough to offer to show me the springs if I ever found my way back to Motley County. I hope I do make my way up there again soon, and am foolish enough to hold out hope that one day I may even swim in the Blue Hole.