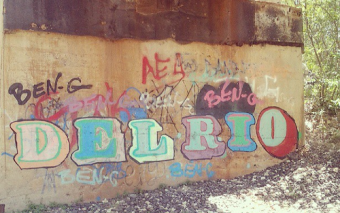 Our first stop is Del Rio, Texas, home to San Felipe Springs. These are among the biggest springs in Texas, ranging from 20 to 40 million gallons a day. During our quick stop we swam with a great group of kids from Dallas who were in town visiting their grandpa. They had never gone swimming in the springs before and it was a treat to get them over the hump of swimming with fish. Then it was off across Lake Amistad (what remains of Lake Amistad) to the Trans Pecos Desert.  The Pecos River was flowing low—a result of the ongoing drought in New Mexico. The Pecos, along with the spring-fed Devils River and San Felipe Creek (fed by the springs above) provide much of the base flow to the Rio Grande. In years like this you can see how dependent the Rio Grande is on the steady flow of spring water—even more reason that folks in Texas should be concerned over the proliferation of water marketing deals being solicited by groups like Val Verde Water Company. VV Water Co has one bid in with San Antonio Water System to pump water from wells in western Val Verde County; I hear they are soliciting deals with Snyder, Texas for water that would be pumped about a mile from the Devils River. Once we were in the Trans Pecos, we couldn’t believe how green everything was—rain definitely fell here recently and the grasses and sage were unbelievably rich. The desert felt alive and humming on the road to Marathon. I’m in love with the Glass Mountains—if you’ve never been to this side of Texas before, you haven’t seen this state’s true beauty.